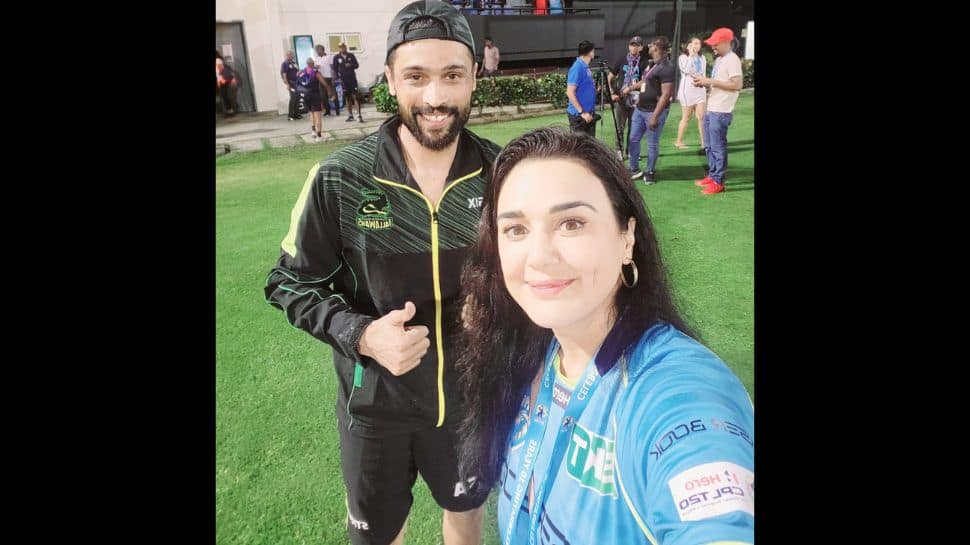 There is no love lost between India and Pakistan cricketers when it comes to action on the field. But when it comes to Bollywood, India wins hands down with even Pakistan cricketers awe-struck by the Indian starlets. Former Pakistan pacer Mohammad Amir ran into Bollywood actress and Punjab Kings co-owner Preity Zinta on the sidelines of the ongoing Caribbean Premier League 2022.


Amir is turning out for the Jamaica Tallawahs in the CPL 2022. On Thursday (September 8), the 30-year-old shared a picture with Bollywood actor and co-owner of Indian Premier League (IPL) franchise Punjab Kings, Preity Zinta on Twitter and wrote: “my all-time favourite from bollywood @realpreityzinta.”


It was Preity Zinta’s side – Saint Lucia Kings – which incidentally emerged victorious over Mohammad Amir’s Jamaica Tallawahs in the CPL 2022 match between both sides at Gros Islet, Saint Lucia.

The Kings won the toss and opted to field first and they were rewarded for that decision with a disciplined performance with the ball and in the field.  Wickets fell at regular intervals to ensure the Tallawahs were restricted to 163/8

In reply, the Tallawahs played the Kings at their own game by taking regular wickets. Mohammed Amir’s early double wicket over rocked the Kings but Johnson Charles’ excellent half century kept the home side in the game. There was still plenty to do when David Wiese strode to the crease but he marshalled the chase superbly to get the Kings their first win of the tournament.


The Tallawahs had made heavy going of their innings after being inserted. They lost too many wickets in the PowerPlay. Kennar Lewis, Shamarh Brooks and Rovman Powell all fell to leave the Tallawahs at 47/3 at the end of the first six overs. When Brandon King was run out courtesy of brilliant fielding from Jeavor Royal, the Tallawahs were reeling at 62/4.


However, Imad Wasim and Raymon Reifer rebuilt the innings and set it up for some late over plundering in the final four overs to ensure the Tallawahs set an intriguing 164 to win. Like the Tallawahs, the Kings innings struggled to get going in the PowerPlay.


They lost four wickets in the first seven overs to leave them in disarray at 39/4 but Tim David and Johnson Charles counter-attacked well to put the Kings side ahead of the game at the halfway stage of the innings.

That advantage seemed to have disappeared when both set batters were dismissed but Roshon Primus and the wily Wiese kept the Kings in the game going into the final few overs. When Primus departed Wiese guided the chase into the final over and hit the winning run to rapturous celebration in the stands.