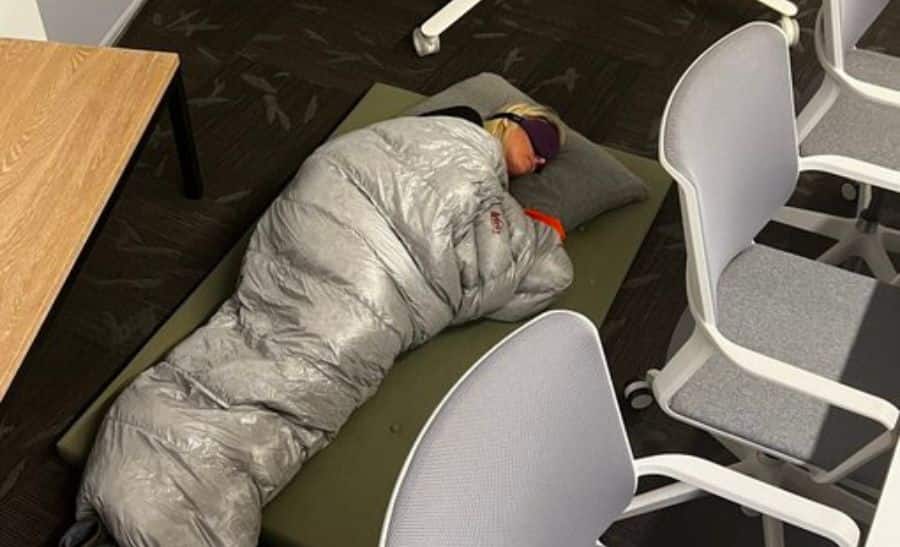 New Delhi: Microblogging site Twitter has turned a nighmare for its employees after Elon Musk’s takeover. One of Twitter’s senior employees has shared a photo where a senior manager could be seen sleeping on the office floor at Twitter’s San Francisco headquarters. According to the sources, employees are forced to work day and night to revamp Twitter.


Earlier, Elon Musk after takeover had told employees to work 12 hours, 7 days a week to revamp Twitter. Moreover, he scrapped Twitter work from anywhere policy to call all employees to come to office at any cost.


Esther Crawford, Twitter’s director of product management, can be seen in the picture resting on the floor of the office wearing an eye mask and a sleeping bag. Employee Evan Jones posted the image on social media with a comment. He wrote, “When you need something from your boss at elon twitter”.

When you need something from your boss at elon twitter pic.twitter.com/hfArXl5NiL
— evan (@evanstnlyjones) November 2, 2022

Since the start of Elon Musk’s announcement to charge $8 for blue tick to Twitter users, a debate has erupted among netizens whether the move is rational or not. A lot of people are complaining Musk’s to charge for a serivce that was free before. However, Musk is in full mood to shut down his complainers with oral punches, sarcasms, tweets and now memes.


Criticizing all complainers who are mewling for charging money for blue tick, he has shared some memes for them. In one of memes, he criticized people for buying happily $8 Starbucks coffee. But they are crying to pay $8 for blue tick for 30 days.


n another tweet, he posted a sweatshirt photo of a brand that costs $58 and put a thinking emoji. Another Twitter user replying on his tweet posted another meme criticizing complainers.